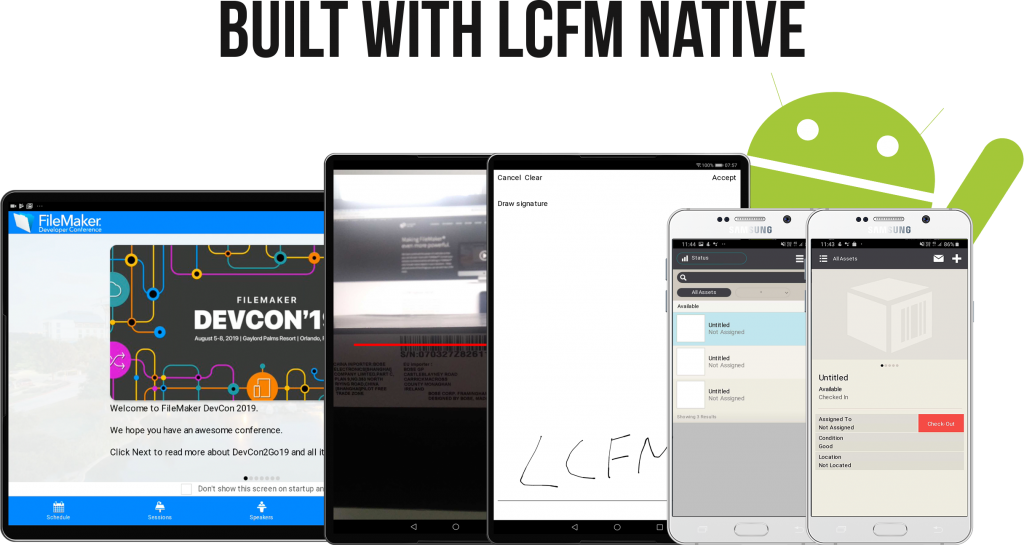 The wishes of thousands of FileMaker users have today come true. Your FileMaker solution can now be compiled for Android.

Your solution will run as a true native app on Android, iOS and Mac platforms (Windows and Linux coming soon). It will call home to your FileMaker server, keeping your data in sync on whatever platforms and devices you and your clients are using. It will even save your data offline and then sync it up again to the server when a connection is restored.

We’ve launched LCFM Native with a feature set we’re confident will run most small to medium size solutions well. We’ve tested extensively on a variety of real world solutions sent to us by our fabulous beta test group, and we have a downloadable sample Android app available here for you to look at and compare to your own needs. We estimate we’ve implemented 95% of the FileMaker UI, 75% of the most widely used and popular functions, and we’ve made a good dent in implementing script steps. As a proof of concept, we’ve compiled the DevCon2Go app released by FileMaker for the conference:

At this point, we are ready for a vast swathe of solution types. It’s time to get out there and start enabling your apps! We have a detailed breakdown document here of what is and is not implemented in 1.0. Anything that is not in this first version, you can rest assured will be coming shortly in a future release. Our aim is 99% coverage of the FM feature set.

One of the great benefits of running your solution via LCFM Native is it offers online and offline syncing to your apps. Run your solution on a multitude of devices, with or without an internet connection. Whenever the app gets a connection, it can sync back to your FileMaker server and update the data. Which can then be shared to any other connected devices. Watch syncing in action:

You are able to compile your solution to a true native app. Drag your solution onto the compiler, and follow the step by step guides here to get your solution compiled for your target platform. You can currently target Android, iOS and Mac. We will be adding Windows and Linux in future versions. Watch the compile process:

Some recently added features in 1.0 include:

Previously enabled features during the beta period include (but are not limited to!):

Get the LCFM Native Compiler, and start compiling your FileMaker solutions for Android today.