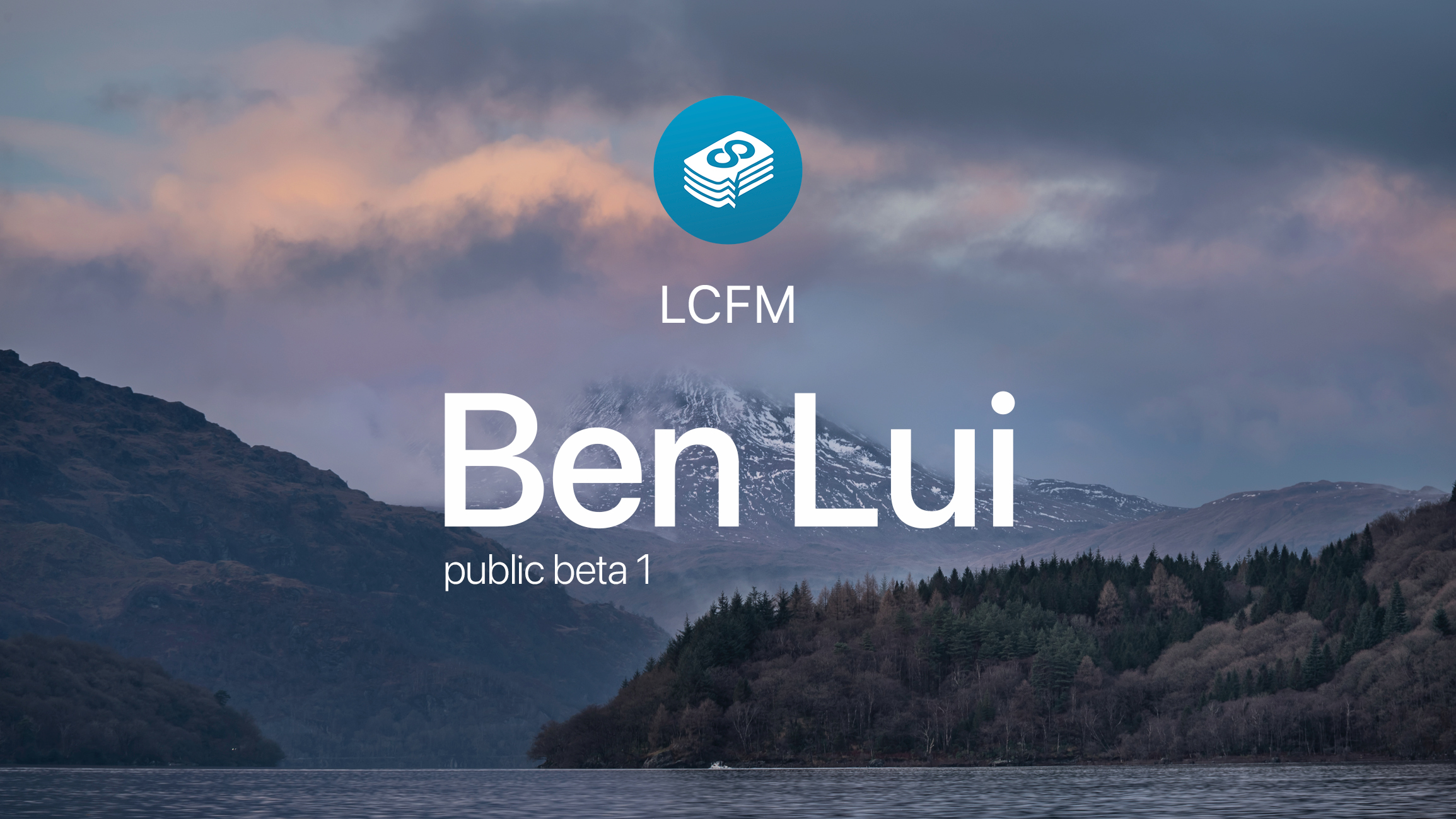 Folks, we have so much to unpack from the title above I just don’t know where to start. Do you want to hear about Ben Lui, the public beta or the free trial first? It’s all great news for you. Not to mention we’ve lowered the pricing barrier to entry…

Let’s start with the public beta. As some of you are aware, we’ve been running a private beta program for a while now. We’ve made so much progress and have a number of successful, sophisticated, beautiful client apps shipping on Android. We are ready for the next huge step, a public beta with a free 7 day trial for everyone.

Think of this a bit like a Google beta, the platform is fully regression tested and working for the majority of FileMaker solutions. Unlike previous test versions, if your app is running well then we invite you to ship it today. If you encounter any issues, sign up for the build service so we can get you over the line quickly, or report them and check back to get another free trial of the next public beta.

88% of the FileMaker feature set is supported. Online-offline sync is working beautifully with large and complex solutions. App store apps build quickly and easily. Performance has been optimised for the majority of apps and we’ve reduced the minimum requirement to allow you to run on lower-spec, lower-cost Android devices.

Drag-drop your FileMaker file on and LCFM will create a feature report telling you about anything that is not yet supported. In the real world what this statistic means is that a majority of apps are now working out of the box. In our testing of 82 varied apps, about 70% are running well or very well, and only 4% do not run at all. We’re improving that score every day. We’re not quite ready to remove the beta label, but we will do so soon.

As part of this release, for the first time we’re offering a free 7 day trial of the LCFM technology. You can sign up, download the software, and start running your solutions through it to see how well it works for you. Run the app on an Android device or on your Mac. 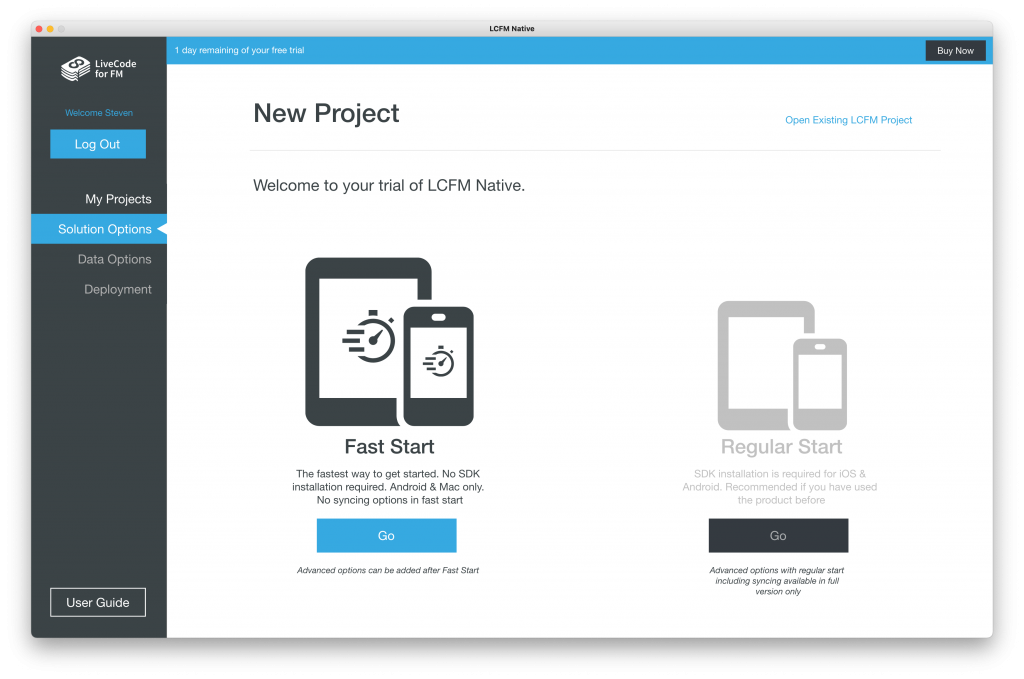 You will find the trial gives you a full report on any features that aren’t yet working in your finished app, or that may work slightly differently. This is generated and output as an HTML file when your solution is run through the compiler. 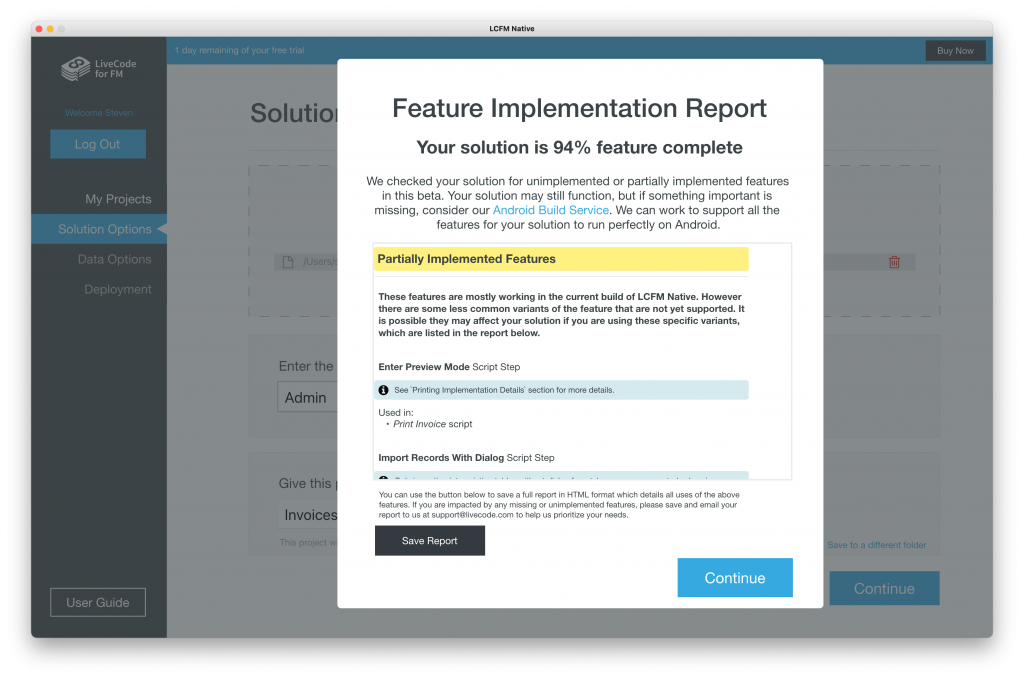 We’ve also added a really short easy to fill out survey at the end of the run, so you can give us feedback on how your solution is running as a native app. 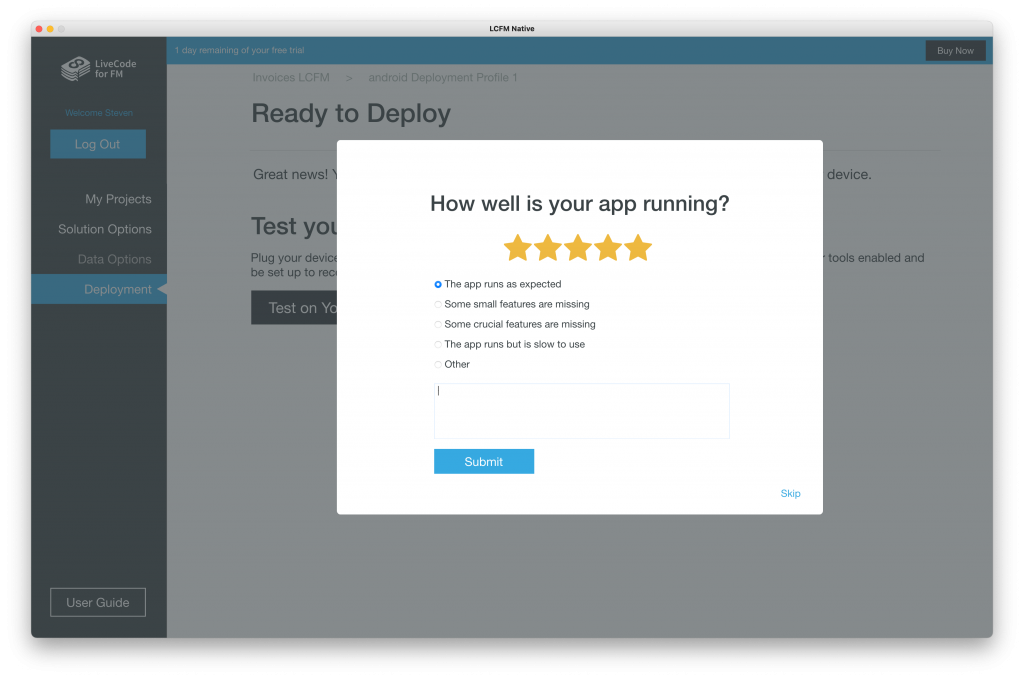 Let us know how well your app is running on Android

If your solution is one of those that lists unimplemented features in your HTML report, and you’d like us to get those features implemented for you, we are offering a service to do that. You can learn more about it here. Please be aware that our availability is limited, so the sooner you tell us you need custom work done the better.

We’re a proudly Scottish company (if you have been at a recent FileMaker DevCon, we were the ones wearing kilts…) and we wanted to mark each major evolution of the LCFM technology with a name that reflects our roots. Ben Lui is one of our famous Scottish munro mountains. It is not very far from Edinburgh, where our team is based, and in fact it has even been climbed by some members of our team.

We decided to pick something with a reasonably pronounceable name for the first one, you probably aren’t quite ready for Creag Meagaidh or Sgurr a’ Bhealaich Dheirg yet…

There’s even more good news for you: for this release we have introduced a new pricing structure, with the entry level pricing now being only $299. Find out more about the pricing for LCFM Native and how it applies to you here.

Having got all that out of the way, what is actually new in this beta since our last (private) beta? Quite a lot! Here are some highlights of things we have added:

Overall, there are 189 new features, fixes and enhancements in this release. LCFM now supports 88% of the entire FileMaker feature set. You can see a full and detailed list of changes in the release notes available from the Help menu within the LCFM Native product.

Do you already have an account with LCFM Native? Simply login to your existing account to get your free trial. For existing customers, Ben Lui is waiting for you in your account downloads area.